Video walls are the ultimate statement-maker. Here’s everything you need to know about video wall signage, from how it works to how it benefits businesses.

There are very few things out there that can wow consumers quite like video walls. Video wall signage is simultaneously imposing, eye-catching, dynamic, and downright stunning.

For this reason, more and more businesses are turning to video walls powered by digital signage in the hopes of blowing their customers away while at the same time serving them up with valuable and entertaining information.

And fortunately, thanks to advances in screen technology and digital signage software, video walls are more accessible than ever. Now it’s no longer cost-prohibitive for small and medium-sized businesses to also leverage video walls.

Video wall: What it is and how it works 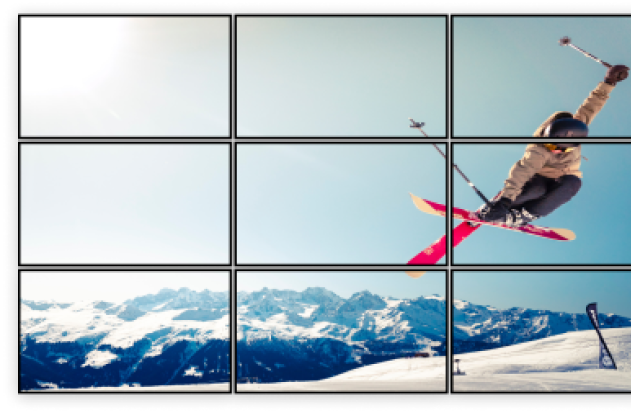 Digital signage video walls consist of a wall of digital displays that work together in unison to create one much larger screen.

Most LED video walls nowadays are made up of four or more 4K screens and are used to grab the attention of customers as they enter a physical location. But with that said, more organizations are creating intricate, non-rectangular, artistic video wall installations that are impossible to ignore.

Video walls are built by “chaining” together multiple commercial TV displays with HDMI cords. By doing this, you only need one media player to power your video wall signage rather than a media player for each display.

For more information on how to set up video wall signage, visit our in-depth guide on deploying multiple display setups.

The most obvious benefit of video wall signage is its ability to wow consumers and grab their attention. But that’s not all.

Since you are capturing the attention of audiences, content is much more likely to be taken in and digested—and not forgotten. Is your content meant to showcase products or promotions? Is it meant to boost brand recognition or tell your brand’s story? Or will it be used to set a certain mood or vibes inside your building?

Whatever the case, if digital signage content is pushed on a video wall, chances are it’ll have a greater effect than on a normal display.

Just make sure to avoid the common mistake of doing too much with your video wall content. Just because it’s big doesn’t mean it should be filled to the brim with text and graphics and images. Keep it simple. Use high contrast colors, thoughtful text, and video where possible.

Businesses that are suitable for video wall signage

Traditionally, video walls have been well-suited for large buildings with lots of foot traffic such as airports, malls, stadiums, hospitals, corporate offices, and the like. Of course, that’s still the case.

But, nowadays, those aren’t the only industries utilizing multiple screen displays to reap benefits. As we mentioned before, no matter the use case, video walls practically supercharge digital signage content, making it much more memorable and effective to audiences.

With that said, any business looking to improve the impact of their digital signage who can afford it should look into installing a video wall. It attracts eyes, makes a huge impression, and provides the ultimate spot for digital signage content to flourish.

Video walls shine in areas with high foot traffic as well as in locations such as lobbies and entrances where people routinely congregate. That’s because video walls make a great first impression in the minds of consumers.

Long story short, make sure your video wall blends seamlessly into the surrounding environment and doesn’t look out of place.

Building a video wall with TelemetryTV

TelemetryTV’s all-in-one digital signage software makes setting up stunning video wall signage simpler than ever. To get started with TelemetryTV, sign up for a 14-day free trial today.